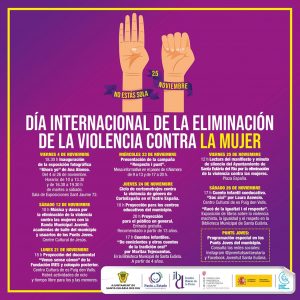 The program of activities to celebrate the International Day for the Elimination of Violence Against Women in the municipality of Santa Eulària des Riu, 25N, incluye exposiciones, dance exhibitions, Film projection, short films and documentaries, Children's Stories, book exhibition...

Like this, for this 25N culture is committed to as a weapon of awareness and defense of the real equality of men and women as well as a frontal rejection of sexist violence. The activities organized by the Department of Equality of the Santa Eulària des Riu City Council include more institutional proposals –such as the reading of the manifesto and the minute of silence on the day itself 25 or the campaign 'Respect and Period'-, pero se centra más en otras que pretenden usar las diferentes expresiones culturales y artísticas como herramienta para ayudar a que las celebraciones del 25-N cumplan su objetivo y se sumen, in a different and attractive way, to the daily work carried out in favor of equality by the Consistory through its Equal Opportunities Plan.

On Thursday 24 there are projections related to gender violence and equality through the cycle of short films against gender violence by CortoEspaña that will be screened at the Teatro España. There will be two sessions (with the screening of six shorts). In the morning, at 10.00 hours a first projection will be made for the IES of the municipality (Bachelor or 4th ESO students) , at 20.00 hours the step will be taken for the general public. Admission is free. The short films are recommended for people over 13 years.

also thursday, but in the Municipal Library, there is a storytelling session for over four years old under the title 'Of Cinderella and other stories from the oral tradition', by Maritza Storyweaver. In the same location there will be an exhibition called 'Equality and Respect Corner' in which essay books will be exhibited and made available to the public., novel and stories about sexist violence.

Continuing with children's activities for 25N, Saturday 26 November the Puig d'en Valls Cultural Center hosts a reading of the coeducational children's story 'Soy así' by Laura Asensio. It is a story in which two very different characters share what makes them very similar at the same time.… the freedom to be themselves! Session of three fused stories to talk in a subtle way about identity and gender stereotypes, the acceptation, self-esteem, the bullying and the joy of being one and the same.

The program of activities to celebrate the International Day for the Elimination of Violence Against Women in the municipality of Santa Eulària des Riu, 25N, incluye exposiciones, exhibitions…

THE UNDERCARD OF IBIZA: IT, CHAPTER 2
MOM MARIA IN CAN JERONI
THE IBIZA PINOCHO BILLBOARD
CONTINUITY OF CONCERTS ESTIU JOVE
TANGO THEATER SHOW: BACK TO LOVE
VOLUNTEER AWARDS