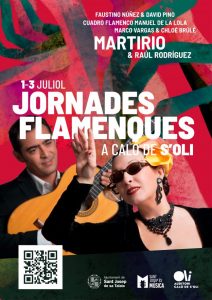 I Flamenco days in the auditorium of Caló de s’Oli, in Cala de Bou

The Caló de s’Oli Auditorium, in Cala de Bou has launched the first Flamenco Conference, in which live performances by great artists of the genre and its fusions will be interspersed with conferences-concerts to celebrate and discover the richness of this musical heritage with the full range of its variants and great names of the flamenco scene to put the soundtrack, with Martyrdom and his son, Raul Rodriguez (twice the latter) as headliners.

The Flemish Days will start on Friday 1 July to the 19.30 h inside the Auditorium with the conference 'Los palos del flamenco. From A to Z.’ by singer David Pino and musicologist Faustino Nuñez. In these sessions that will be extended to both Saturday and Sunday, the musicians will guide the attendees through the construction of flamenco from singing and guitar, and they will deal in depth with this musical genre and its differences between the different styles.

Pino has a degree in flamenco from the Superior Conservatory of Córdoba, where he is a professor and directs the chair of Flamencology at the University of Córdoba. Among a long list of awards, he received the Soleà at the Las Minas International Cante Festival in Murcia on 2003. He has performed in Mexico, Japan and almost all of Europe. Núñez, meanwhile, has worked with musicians of the stature of Carlos Núñez, Carmen Cortés or Javier Barón has been musical director of the Antonio Gades Company and chairs its foundation, besides being a prolific author and researcher of the genre.

After the conference from 21:00 hours comes the turn of the local talent with the concert of the flamenco group of Manuel de Lola, with Manuel Jiménez who debuts in solitary as a dancer. He will be accompanied by Antonio Muñoz on guitar, Luis Amador on percussion, Sandra Zarcos as singer and Azahara Muñoz in the choirs.

Saturday 2 July, after the second session of the concert-conference of the teachers Pino and Núñez, around the 20.30 hours will be the time to enjoy the 'Universal Shipwreck' presented by Marco Vargas and Chloé Brûlé, a flamenco dance show in the outdoor area of ​​the venue. «On this occasion they approach ideas such as individuality and solidarity, borders and freedom, immobility versus creativity or chaos versus harmony, always maintaining the commitment to the space and the links that arise in it »explain from the dance company.

To the 21.30 it is time to return in the interior room of the auditorium for the recital of Martirio with Raúl Rodríguez, called "Travel", with a copla repertoire, Flamenco, Latin American song and a choice of songs by Chavela Vargas in tribute to the Costa Rican artist. “From blues to flamenco, from bolero to tango, from copla to swing. In this sometimes cultured tone, others, popular, always complicit and heterogeneous, that characterizes the music of Martirio and that, with the instrumental versatility of Raúl, have managed to conquer the public, both in Spain and Latin America, in scenarios of all kinds, from Lope de Vega to Seville, to the Sabatini Gardens to Madrid, from Argentina in Chile, Mexico or Colombia, and of course in the most diverse festivals, theaters and squares of our country», explains the organization of a creative tandem formed by a pioneering singer who breaks stylistic boundaries and her son, a talented instrumentalist who has a consolidated career.

The last of the days, Sunday 3 July, It will be the third session of the conferences on flamenco styles by Pino and Núñez, starting from the 20 hours on stage inside, before Raúl Rodríguez doubles down with a flamenco-fusion montage in a 'power trio' format and flamenco dancing on the outside stage. It will be from 21 hours in the performance that closes this first flamenco weekend of the summer.

Free admission prior reservation at cultura.santjosep.org

The Caló de s’Oli Auditorium, in Cala de Bou has launched the first Flamenco Conference, in which live performances by great artists of the genre will be interspersed…