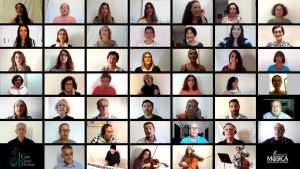 The International music day held the 21 June (although in some countries they celebrate it 1 October) and it commemorates its various manifestations of music and its international significance. This year, due to the pandemic the activities are online. For this reason, the song presentation has been prepared by the Ibiza City Council's Music Board of Trustees We want to be together performed in confinement by the Choir Ciutat d’Eivissa.

The song, three voices has been composed by the choir director, Miguel san Miguel, the members of the choir have recorded it in their houses individually and it has finished mixing in Magrana studios. It has been released on the Facebook page of the Patronat de Música d'Eivissa:

This is, without a doubt, a good opportunity to honor all musicians and styles that everyone enjoys and shares, in the sense of uniting and sharing the same feeling, especially in these difficult times.

The song We want to be together it talks about improvement and is an invitation to reflect on the situation we are experiencing. It is therefore, very successful to present it at the summer solstice, on 21 June, the ""Music Festival", started in France in 1982 and instituted as a European celebration in 1985 (European Year of Music). Since then, the European Union has held a day designed to promote cultural exchange between peoples and the musical transfer from one territory to another..