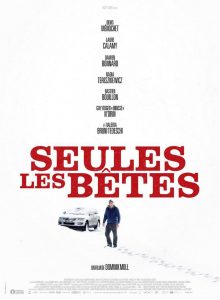 This week, the Fresh Film cycle organized by the Sant Josep City Council programs the films “only the beasts” and “White elephant”.

Directed by Dominic Moll, this claustrophobic thriller with a very elaborate story that fits like a perfect puzzle and in which some excellent performances stand out, tells us about the disappearance of a woman, whose car shows up on a remote road after a snowstorm.

The film was nominated for the César Awards for Best Supporting Actress. (Laure Calamy) and Adapted Screenplay and won the Audience Award and the Best Actress Award (Nadia Tereszkiewicz couple) at the Tokyo International Film Festival.

Saturday 6 in August of 2022 also to the 22.00 hours the square of the Church of Sant Jordi hosts a new projection within the cycle dedicated to the Argentine actor Ricardo Darín, with “White elephant” (2012).

Directed by Argentine filmmaker Pablo Trapero (“The Buenos Aires”, “The stillness”, “The clan”) this Spanish-Argentine co-production tells the story of friendship between two priests, who after surviving an assassination attempt by the army settle in a neighborhood of Buenos Aires, where they will fight against corruption, confronting the ecclesiastical hierarchy and the governmental and police power, risking his life for the good of the neighbors.

a committed drama, with a great staging and outstanding performances that received eleven nominations at the Sur Awards (including Best Picture and Director) and won the Best Editing Award at the Havana Festival.

Both screenings are free.

THE UNDERCARD OF IBIZA
THE TRAIN GIRL IN SANT JORDI
'GO TO MAY’
CHRISTMAS CONCERT OF THE CHORUS
ERWIN BRONER EN SA NOSTRA SALA
Emmerich re-enters this genre that he dominates so much to narrate how a mysterious force knocks the Moon out of its orbit and sends it into a direct collision with the Earth at full speed.