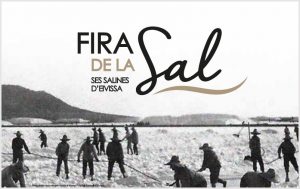 During the weekend 27 to the 29 October takes place II Feria de la Sal in Sant Josep de sa Talaia. An event that aims to disseminate the heritage and culture of Ibizan salt industry. The days have staged various activities and how it was collected manually this precious product.

The II Feria de la Sal It is a free and open appointment to the public organized by the municipality Sant Josep dee and has the support of the Balearic Government and the Consell de Ibiza, it serves to remind a tradition that has been the main source of the economy of the island until the early 50 and representing the first industry Pitiusas.

This year, the fair has different activities such as workshops, Theatre, exhibitions, Ibizan food tastings, audiovisuals, the presentation of a book dedicated to the history of salt or a concert with Lina Tur poetry in honor of ses Salines. Craft workshops are aimed at younger.

One of the most important activities takes place on Saturday, 28 starting from the 10:00 hours in The Age Old Salt Pile’, where a fire lights It is simulating those used to alert, through smoke, workers of the towns that began gathering. Then, a group of saliners will represent the extraction of salt manually in the Natural Park of Ses Salines.

Another space for the development of the conference is the Interpretation Center of ses Salines, the old salt ship converted into contemporary art gallery, where editing the manuscript of the eighteenth century will be presented 'Salt of the islands of Formentera and Yviza’, Authors Antoni Ferrer Abárzuza, Miquel Frontera Antoni Serra and Torres Tur. Also, is performed dramatized visits in Torre de sa Sal Rossa, Shipper protecting the old salt. Other visits included in this program is the Pou des Coal, eighteenth century a well that supplied water to the railroads that transported salt from the ponds to the cargo area.

Attendees can also learn the uses of salt, which it was used as a preservative bone, olives and fish, and taste even a bones cabbage, traditional dish of salted pork bones. The folk group of San Jorge Salinas will perform traditional folk dances, and the call will be staged Salpassa, a ritual where the priest blessed the houses leaving the door rosemary, water and salt for protection.

To facilitate access to these protected for its historical and cultural significance spaces, it has a Free bus service. On the one hand, a line leading from Sant Jordi ses Salines to be enabled, each 30 minutes, of 09:00 hours until 14:00 hrs., and this line will also work in reverse on schedule 09;30 up to the 14:30 hrs.. On the other hand, there is a line that will leave the Ses Salines Natural Park and takes visitors, in hour of 09;00 hours until 14:00 hrs., Satori in Sa Sal Rossa and Interpretation Center in Salinas. In addition, the two car parks are free ses Salines.

During the weekend 27 to the 29 October takes place the II Feria de la Sal in Sant Josep de sa Talaia. An event whose…