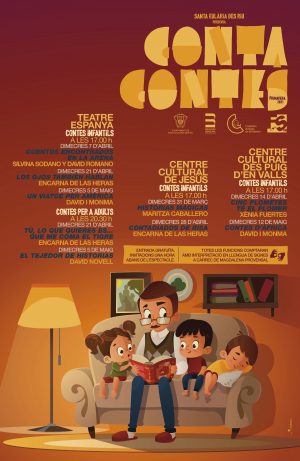 A new edition of Contes de Primavera has arrived in Santa Eulària des Riu with new features such as that of being fully developed in other municipal auditoriums and, above all, to include sign language interpretation in all sessions, so that the magic of these stories can also be brought to children and adults with hearing problems.

For reasons of space due to sanitary restrictions, the Municipal Library of Santa Eulària des Riu will not be able to host the performances of Contes de Primavera. For this reason they are transferred to other dependencies. In Santa Eulària its usual headquarters are moved to the Teatro España. In addition, as on other occasions, the cycle also moves to the auditoriums of Jesús and es Puig d’en Valls.

The screenings of the storytellers that will begin to be carried out from next Wednesday will incorporate a sign language interpreter so that those who have hearing problems and who must communicate through this system are not excluded from this initiative.

On the other hand, of the nine scheduled sessions, seven of them are aimed at a family audience and two of them focus on stories exclusively for adult audiences. Both will take place at the Teatro España, late in the afternoon and in the days 21 April 5 May. La primera representación es el miércoles, 31 March, starting from the 17:00 hours at the Cultural Center of Jesus (‘Magic stories’, with Maritza Caballero) and the last one the day 12 May at the Es Puig d'en Valls auditorium (‘Tales of Africa’, with David i Monma).

Wednesday 7 of April.- 'Tales found in the sand', with Silvina Sodano and David Romano.

Wednesday 5 of May.- ‘A Journey Through America’, with David i Monma.

Wednesday 5 of May.- ‘The weaver of Stories’, with David Novell.

Wednesday 14 of April.- ‘Five feathers have the plumber’, with Xènia Fuertes.

Wednesday 12 of May.- ‘Tales of Africa’, with David i Monma.

A new edition of Contes de Primavera has arrived in Santa Eulària des Riu with new features such as that of being fully developed in other municipal auditoriums and, above all, de incluir en…

HERITAGE NIGHT
THE SEA PARTY IN ES CUBELLS
THE UNDERCARD OF IBIZA: THE WILD
AUTUMN FAIR IN Ethnographic Museum
NIGHTS IN THE DIASPORA FESTIVAL Tanit
EXHIBITION: THE ROLLING STONES